Many adults see alcohol as a natural part of going away on holiday. They might start celebrating with a drink at the airport, and once they’ve reached their destination, it’s often time to raise a glass or two on the balcony.

Not everyone does this, of course, but when they’re away, many adults drink both larger amounts and differently to when they’re at home. So it’s hardly surprising if teenagers think about alcohol in connection with travel. Think about how you view alcohol when you’re on holiday and remember that you’re a role model for your child.

Everyone was drinking like crazy when we went on an All Inclusive. You could just go up to the tap and help yourself to beer. Even the kids were doing it. No one was keeping track. 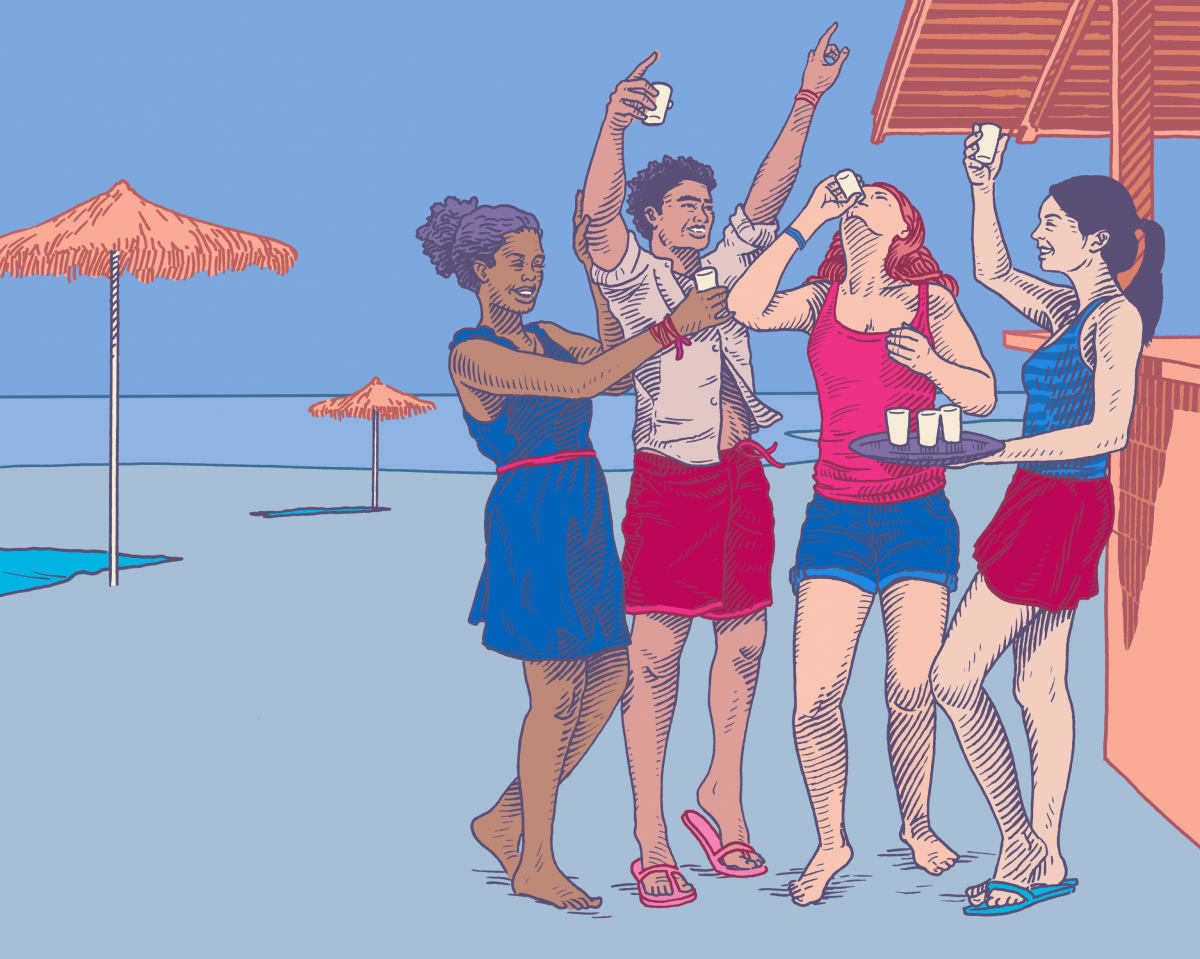 NO ONE SAYS, ”ENOUGH”

A lot of organised trips are designed to appeal to party-mad youngsters. Alcohol and other drugs may be widely available and there are no adults standing in their way, whether they head for “Bar Street” on Rhodes or to a ski resort in the Alps. And even if your teenager doesn’t drink, travelling without adults is risky.

Most of the big language course travel firms have a total ban on alcohol and narcotics. Anyone caught with drugs will be sent home at their own expense and will not get a refund for the course. But it’s impossible for the organisers to keep an eye on every single teenager, 24/7.

There are, alongside the well-known travel firms, a number of companies specialising in travel for young people, where partying and alcohol are often the main attraction. Most of these travel organisers have a lower age limit of 18, but travelling unaccompanied when you’re under 18 is still possible if you can show a signed authorisation from your parents. Think long and hard if your child asks you for one.

When I was abroad, I could walk into the nearest grocery store and buy spirits and cider. Nobody said anything or stopped me.

TALK ABOUT THE RISKS. Travelling independently can be both exciting and educational. If you’ve agreed that you child can travel, talk about what might happen and how important it is that they take care of themselves. You also need to make it clear to them that different cultures may have a very different attitude towards alcohol and be considerably harder on drunken young people than would be the case at home.

When you’re abroad, you can just party as much as you want. There’s no one there that you know and who you’d rather didn’t see you in that state.

NO, EVERYONE ELSE DOES NOT GET TO GO. There’s nothing odd about saying, ”No” to a teenager who wants to go on holiday with their friends. You are responsible for your child and saying, ”No” is not cruel, even if their friends’ parents have said, “Yes”.

You might also like to think about how often it’s actually true that ”everyone else is allowed to”, or whether that’s just what every teenager says to their hesitant parents.