Teenagers are seldom interested in a relaxed, moderate approach to alcohol – they drink, first and foremost, to get drunk. There is no research showing that a teenager who drinks half a glass of wine at home drinks less when they’re with their friends.

There is, however, research showing that teenagers who are offered alcohol at home drink both more, and more often. If you’re allowed to drink at home, it’s like a permission slip to drink when you’re out, too.

28% of upper secondary school students whose parents think it’s OK for them to drink get drunk every month.

IT SENDS THE WRONG SIGNALS

The law does not prohibit you from offering your own children a small amount of alcohol if it’s done in a controlled manner. But it sends the wrong signals. If you tell teenagers that they shouldn’t drink and that alcohol can be harmful, offering them a glass now and then is simply confusing them.

"My parents let me have a taste when they’re drinking wine. They don’t really mind. They just laugh and think it’s fun".

Your attitude matters a great deal. 15 per cent of ninth graders and 28 per cent of year 2 upper secondary school students whose parents think it’s OK for them to drink alcohol, get drunk every month.

If you ask teenagers whose parents say no, fewer than five per cent of ninth graders and ten per cent of upper secondary school students get drunk that often.

Make sure that all of the adult members of the family take the same approach. It’s very confusing for teenagers if the adults in their family say and do different things. 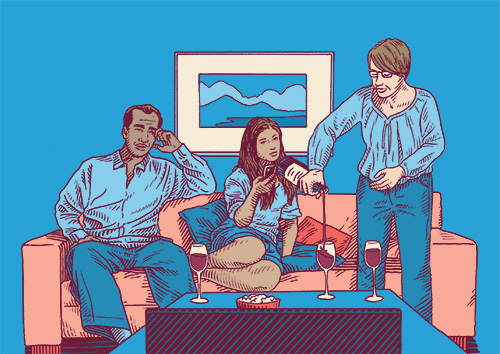