Ask your teenager about their plans for the day, whether people are going to be drinking alcohol, and what they think about that. Tell them what you think about drinking and that it’s unacceptable to you that they drink alcohol. Teenagers care what their parents say – even if it doesn’t always seem like it. Show them that you’re there for them, whatever happens. It’s always better that your teenager knows they can come home drunk, even if that’s unacceptable to you.

It's chaos on New year's Eve. Everyone's drunk. People are throwing up and running around town.

Young people who are given alcohol by their parents drink more. And if you buy them alcohol, you’re also telling them that it’s OK to drink, even if you’re not an adult. Some parents think it’s OK to give their teenagers alcohol on special occasions, e.g. at the end of the ninth grade or at Midsummer. But warning your child about alcohol and then helping them to drink makes no sense, even if it’s only for one evening.  What’s best is to be clear and consistent.

TALK TO OLDER SIBLINGS AND FRIENDS

Many teenagers get hold of alcohol through their boy- or girlfriends, friends, friends’ siblings or other adults. Talk to the ones who are aged 20 or older and who are around your teenagers, and help them say “no”. Tell them that you expect them to be mature enough to act responsibly.

KEEP AN EYE ON THINGS

Make sure that your teenager has their mobile with them, or that you can get in touch with them in some way during the evening. Maybe you can agree in advance on some times when you check in? And ask your teenager to let you know if they go on somewhere else or if their plans change. Make sure that you, or another adult, are sober so that there is someone who can come and get them or help them, if necessary. Maybe you can also visit the places where your teenager or other young people tend to hang out? Get together with other parents and be out and about that evening. But talk to your teenager about it first so that they understand that you’re not spying on them – you’re just being there for them if things go bad.

There are always loads of pictures from parties and stuff on social media the day after some big holiday.

Talk to other parents about the do’s and don’ts of holidays. If your opinions differ, you don’t have to change your mind because other people think differently. You’re the parent, and as such, you’re always the one who decides what goes for your child. It isn’t the end of the world if you as parents don’t all agree. The important thing is that you have talked about it and that you and your teenager know where other families stand.

There are lots of things young people can do on holidays. Maybe you can help your teenager find something suitable to do and get involved in helping your teenager and their friends take part.  If there’s an agreed activity for them to look forward to, there’s less of a risk of them wandering aimlessly around town.

It’s a good idea to be awake when your teenager comes home or have a talk about their evening the next morning.  Don’t turn it into a cross-examination. Try and show them, instead, that you’re interested and that it’s important that you talk to each other about what they got up to and how things went. 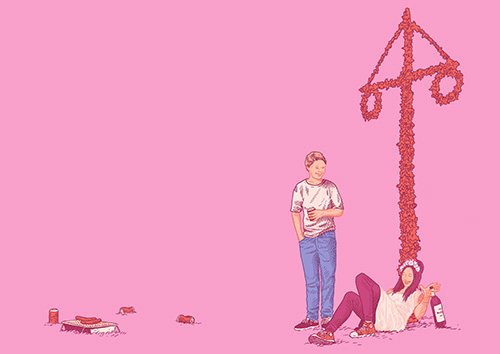